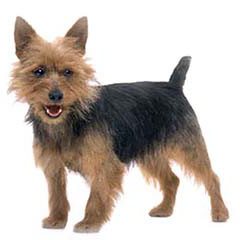 Happy, sunny, and feisty as all get-out, the Australian Terrier knows he has serious work to do: chase anything that moves, bark at anything that approaches, and keep you in stitches. A fun and friendly companion for people, the Aussie can get scrappy with other dogs, especially of the same sex. Male-female pairings work best, but the Aussie would rather be on your lap or at your side than hang with mere dogs. He will chase small animals, so don't let him babysit the hamster or expect him to ignore backyard wildlife. Because of his strong hunting instinct, the Aussie must be kept on a leash or in a fenced yard, but he'll need to live inside most of the time, where he can be your constant, somewhat vocal, always amusing companion.

Sturdy and small at just 10 to 11 inches tall and about 12 to 14 pounds, the Australian Terrier has a long body, short legs, and a long strong muzzle with big teeth for vermin hunting. With small, pointed, erect ears over bright, intelligent eyes, the Aussie has a harsh, straight outer coat and a short, soft undercoat with a thick ruff of hair around the neck and slightly feathered forelegs. Australian Terriers may come in three colors: blue and tan, sandy, or red.

Fetch? O.K. Fetch again? So five-minutes-ago. The Australian Terrier learns quickly but finds drilling interminably boring, so keep training fresh, fun, positive, and full of exciting rewards. It's the best way to get results from the sensitive Australian Terrier, who can be maddeningly stubborn now and then, but won't respond well to harsh treatment, anger, or punishment. Several short daily training sessions work best.

Aussies have that rough-and-ready look, and they really don't take much grooming at all to stay looking true to form. Brush the wiry coat about a once a week, and pluck out long stray hairs with your fingers, especially around the eyes and ears, to keep these harsh wiry hairs from irritating the sensitive Aussie. You or a professional groomer can trim neatly around the feet and tail, give the Aussie a bath every month or two, and trim nails. Brush those big teeth every day or two, and that's about it. Otherwise, give the Aussie plenty of daily exercise in safely contained areas, along with lots and lots of love.

Generally healthy little terriers, Australian Terriers can be prone to diabetes, thyroid disorders, and epilepsy. Like many small dogs, they can also be prone to luxating patellas (kneecaps slipping out of place), and Legg-Calve Perthes disease (a degenerative hip disease). Ask your breeder and veterinarian about these issues.

© Copyright 2014 LifeLearn Inc. Used and/or modified with permission under license.

View All
Want to get to know us better? Meet our Team